MANILA: The Philippines was braced for powerful Typhoon Kammuri as the storm churned closer, forcing evacuations and threatening plans for the Southeast Asian Games events near the capital Manila.

Kammuri is expected to make landfall late Monday or early Tuesday in the nation’s east with heavy rains and wind gusts of up to 185 kilometres (115 miles) per hour, forecasters said.

The storm is on track to then pass close to Manila, which is home to some 13 million people and the site for many of the SEA Games competitions.

Nearly 70,000 people have already fled their homes in the Bicol region, which is where the typhoon is expected to make landfall.

“We hope there won’t be any damage, but given its (Kammuri’s) strength, we can’t avoid it,” Mark Timbal, spokesman for the national disaster agency, told AFP.

“We have preemptively evacuated people in areas that are in the storm’s direct path.”

The weather bureau also warned of rain-induced landslides and possible storm surges of up to three meters (10 feet) which could hit coastal areas in the nation’s east. 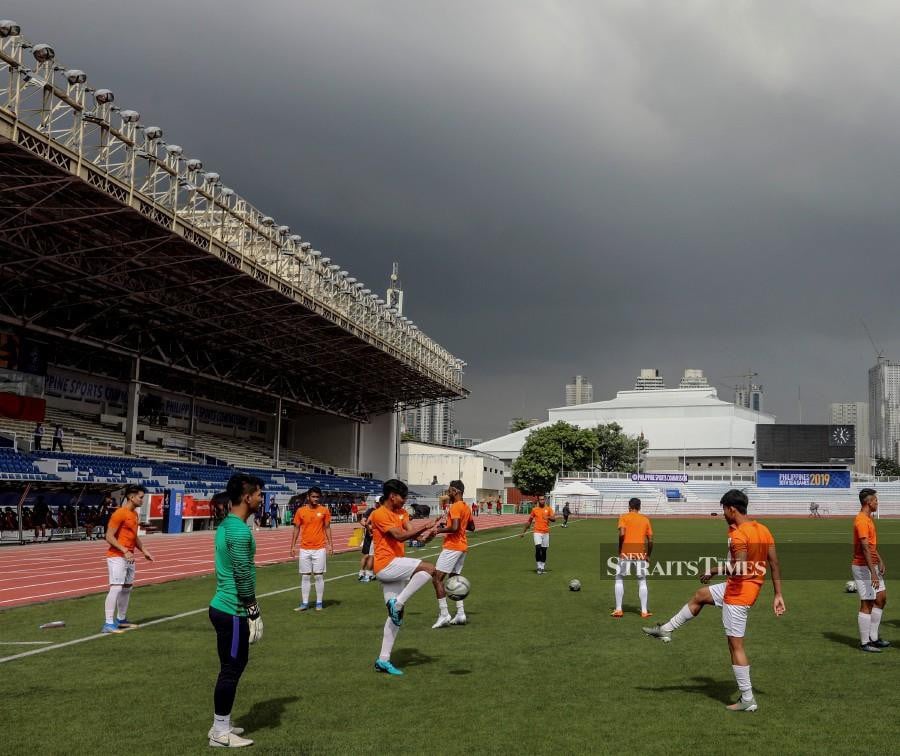 The Malaysian Under-22 team trains under cloudy weather at the Rizal Memorial Stadium as part of their preparation for the match against Philippines, in this picture taken on Nov 28. -NSTP/Osman Adnan.

The Philippines is hit by an average of 20 storms and typhoons each year, killing hundreds and putting people in disaster-prone areas in a state of constant poverty.

The country’s deadliest cyclone on record was Super Typhoon Haiyan, which left more than 7,300 people dead or missing in 2013.

Kammuri is already snarling plans for the SEA Games, which opened Saturday for thousands of athletes from the region and is set to run through December 11 in and around Manila.

Windsurfing was cancelled and triathlon events were held earlier than scheduled. Organisers are due to deliver an update on the impact later on Monday.

Organisers have insisted they have contingency plans in place, including allowing indoor events to proceed but with attendance limited to competitors.

The storm is the latest trouble for the SEA Games, which saw a series of transport snafus and a rush of last-minute construction ahead of the opening.

This year’s Games in Clark, Manila and Subic are already particularly complex, with a record 56 sports across dozens of venues that are in some cases hours apart by car.

Around 8,750 athletes and team officials are expected at this year’s 30th edition – the biggest ever – along with another 12,000 volunteers. Organisers hope more than 500 million viewers will tune in on TV by the end of competition on December 11.

In an eclectic programme, Olympic sports like swimming and athletics sit side-by-side with regional favourites such as martial arts, and this year athletes will even battle an obstacle race course in Manila.--AFP