'These boys are our future'

MALAYSIA may have failed to qualify for the 2020 AFC (Asian Football Confederation) U-16 championship but coach P. Maniam doesn’t want this to be a factor that will lead to his boys getting “lost” in the system.

After seeing his team winning the AFF (Asean Football Federation) U-15 title in August and bowing out in the AFC qualifiers in Vientiane, Laos on Sunday, Maniam feels that they have the potential to go far in professional football.

“Of course the players cried because they were very disappointed (not reaching the next round) as this also means they will miss out on a lot of things. Qualifying would have meant international friendlies and exposure to top teams,” said Maniam.

“I urged the FA of Malaysia to continue to develop this team. Not just FAM but also NFDP (National Football Development Programme) and AMD (Mokhtar Dahari Football Academy). They have to really take care of these players because these are our future footballers.

“I hope these players will be looked after and guided, and not fade away through the system. We can produce a lot of good players from them in the future.”

Though the team did not make it past the group stage, the Malaysians earned the respect of fans with their fighting performance against defending champions Japan. 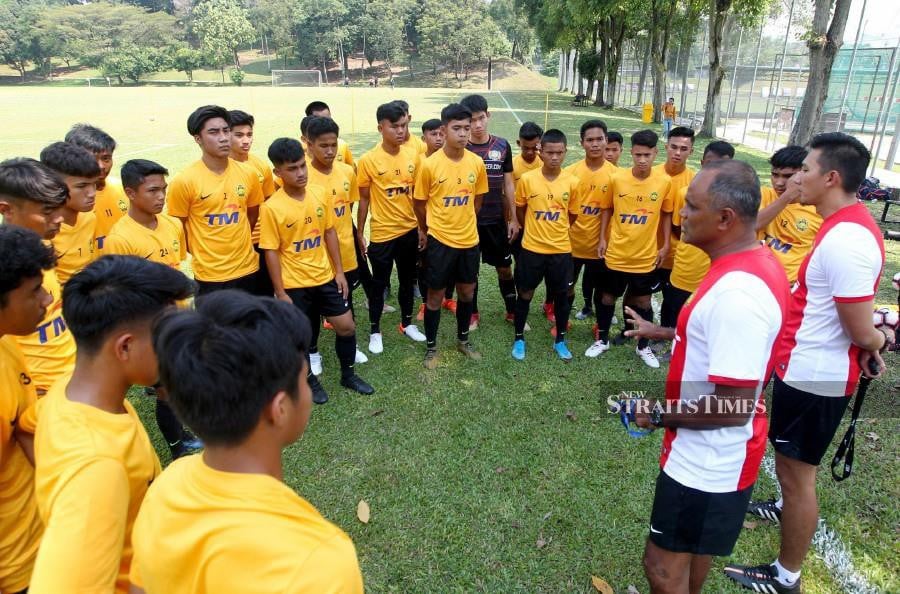 MALAYSIA may have failed to qualify for the 2020 AFC (Asian Football Confederation) U-16 championship but coach P. Maniam doesn’t want this to be a factor that will lead to his boys getting “lost” in the system. --NSTP/EIZAIRI SHAMSUDIN

Maniam’s boys nearly put the young Blue Samurai to the sword but Japan survived by scoring an injury time equaliser for a 2-2 draw. And most remarkably, Malaysia were down to 10 players after goalkeeper Zulhilmi Sharani was sent off in the 63rd minute for fouling a Japanese player.

“We proved that we could have beaten Japan because Malaysia were leading 2-1, and Japan are considered as one of the top teams in Asia,” said Maniam.

“We didn’t let Japan play their game, we created a lot of chances with just 10 players and we were able to hold them off.

“The Japan coach (Moriyama Yoshir) told me their team had never encountered a game like that... there was a lot of pressure (by Malaysia) and they couldn’t play their normal game. They couldn’t execute their plans because we pressed on and did not allow them to play.”

Maniam’s regret at the AFC U-16 qualifiers was the shock 1-0 defeat to Laos in their Group J second game after Malaysia had whipped Cambodia 7-0.

“The big letdown for me was against Laos. We were disappointed because we should have collected three points. We are not making excuses but four or five of the players were down with fever but they wanted to play and give it their best.

“I have no complaints about the team. There is only room for improvement. Yes, I am confident they have a good future,” said Maniam.