Taking a stab at Gundala

URNING comic books into films is not just happening in Hollywood. The trend is also catching on in Indonesia.

The series, which covered 23 books from 1969 to 1982, is about a man named Sancaka who gains the power to shoot lightning bolts from his hands after being struck by lightning.

He then uses his new superpower to fight injustice, under the guise of Gundala.

Joko, who was born in Medan, recalls: “Two favourite things I loved as a child were reading comics and watching films. I received my life lessons from [them]. I grew up reading Gundala.”

So it was not difficult for the 43-year-old director to do a film on this character.

While the story of Gundala has been adapted to film before (in 1981 by director Lilik Sudjio), Joko’s version is a reinterpretation of the comicbook series, updated to focus on problems facing modern-day Indonesia.

However, Joko was tight-lipped about revealing details of his version. He preferred to surprise audiences with what he has done in the film.

The film, which will premiere in Indonesian cinemas on Aug 29, stars Abimana Aryasatya in the lead, supported by Tara Basro, Ario Bayu, Cecep Arif Rahman, Rio Dewanto and Muzakki Ramdhan. 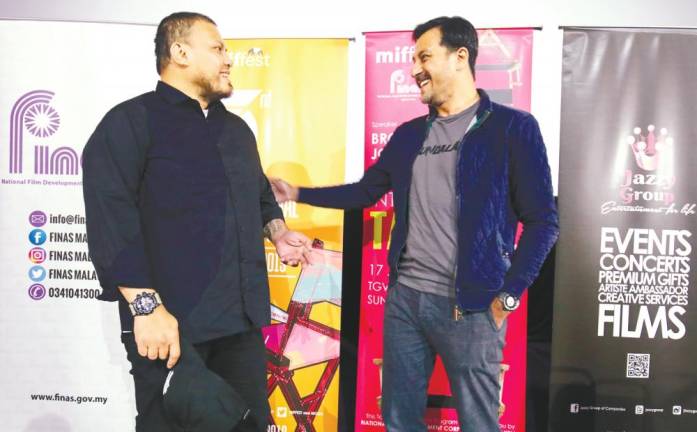 Malaysian actor Bront Palarae plays Pengkor, one of the key villains in the film.

When asked if Bront’s casting was a marketing strategy to get Malaysians to watch Gundala, the director was quick to reply: “I do not work that way.”

Joko, who was in Kuala Lumpur for the recent 3rd Malaysia International Film Festival, insisted at the interview that he hired the actor because the role fits him. “Bront has a strong screen presence. The character he plays is a charismatic one.”

Joko added that had he been motivated by marketing Gundala, he would have hired an Indonesian actor with a strong social media presence to play the villain.

He said: “Gundala is a story close to the people. It represents the hope of the Indonesian people. They believe someone can save them from bad situations.”

It was revealed that Gundala’s costume in the film was made by the Los Angeles-based company that also created costumes for the TV shows Watchmen and Daredevil.

Joko is already working on his next project. His next film, Perempuan Tanah Jahanam, is a thiller horror.

It’s about down-on-her-luck Maya who learns that she has inherited a house back in her ancestral village. She returns to the village, unaware that the community plans to kill her to remove a curse that has plagued the village for years.

The film is expected to be out on Oct 17 in Indonesia.

Iconic Indonesian actress Christine Hakim, whom Joko admires, is playing a key role in the film. The director is thrilled to have been able to work with her.

“I wrote the character specially for her,” Joko said. “She is intense.”

Strong female characters are a feature in most of Joko’s films. “In my life, the women are always stronger than the men,” he explained, just like his mum who had always been stronger than his dad.

Joko, the youngest of three children, came from a poor family. His father was a rickshaw puller. His mother was determined that her family would not be poor forever.

He recalled that when her clients could not pay the instalments, she would collect payment in kind.

He found her perseverance admirable and strived to emulate her spirit each time he faced his own obstacles. His mum passed away in 2009.

“My mother had such a colourful personality, and I have written her into most of my scripts,” he added. “Many wonderful actresses have played her.”

One of his dream projects is to direct a film based on a script he wrote called Coming Home to Punish Mother, which is loosely based on his relationship with her.

It’s a story about a mother and son who have been keeping secrets from each other. One day, the son decides to punish his mother by unloading all his secrets on her.

Asked when he would begin work on this film, Joko said: “I will wait till I am good at making films.”