KUALA LUMPUR - FEW first couples are spoken of in one breath as much as Tun Dr Mahathir Mohamad and Tun Dr Siti Hasmah Mohd Ali.

This is testament to the unstinting support that Dr Siti Hasmah as she is fondly known, has shown her husband for his leadership, in good times and bad.

She walks with dignity, whether at a red-carpet event or a woman’s rights march. She is comfortable with trading views with world leaders as she is on a roadside curb at a demonstration to support her husband.

Malaysians saw this side of her during the run-up to the 14th General Election when she stood side by side with Malaysians from all walks of life at the rallies. Hers was a quiet presence that lent fortitude to any gathering.

Truly, throughout Dr Mahathir’s public life, Dr Siti Hasmah has always maintained a strong and subtle stand by his side while juggling her roles as daughter, wife, mother doctor, advocate and leader admirably.

Whether she realises or not, she is the inspiration behind the belief that beside every successful husband is a wife who holds her own. 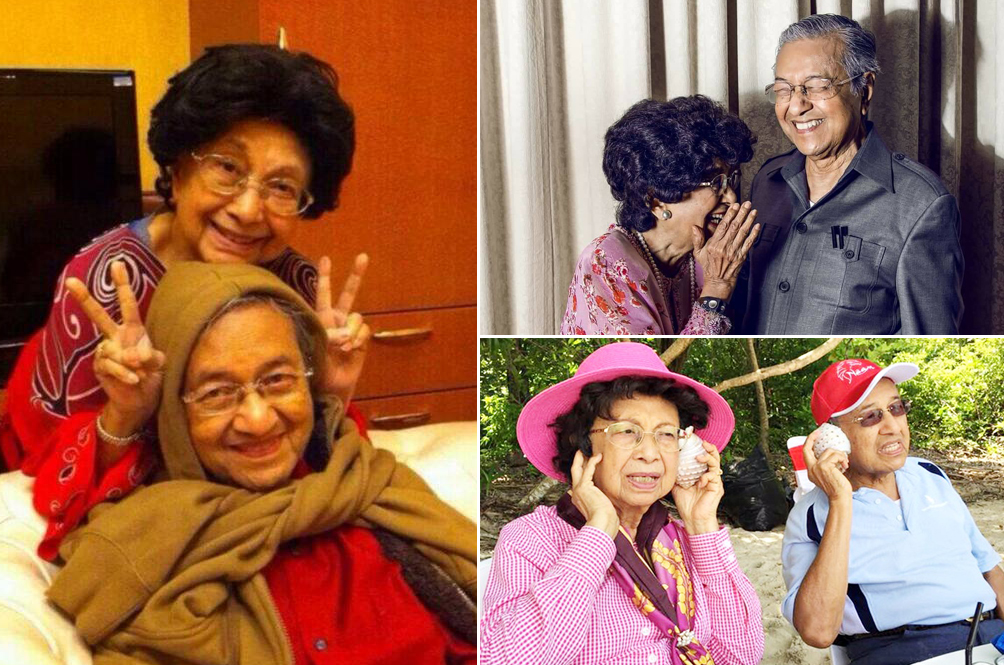 As she turns 93 today, Dr Siti Hasmah can look back with pride on her many valuable contributions to our nation. Besides being an exceptional wife to the prime minister, Dr Siti Hasmah is respected for the many causes she has stood for herself.

I first met her on an assignment in Iraq in 2000. Before this, I saw her from a distance when I covered events she was invited to officiate. In 1995, she headed the Malaysian delegation to the United Nation’s 4th World Conference in Beijing. This was where she spoke with conviction in a pledge all countries were asked to make that Malaysia work towards making sure she met the 30 per cent target of women at decision-making level in the public section by the year 2000.

One morning in March 2000, I received a telephone call from someone who introduced herself as “Siti Hasmah”. Flabbergasted, I pressed the phone closer (it was her!) to hear her asking if I would like to accompany her and some non-governmental organisations’ women on a goodwill visit to Baghdad to study the effects of sanctions on the people there, especially women and children.

It was a delegation of 11, including Dr Siti Hasmah (then Datin Seri Siti Hasmah), the then Iraqi ambassador to Malaysia Adnan Malik, members of Bakti (Association of Wives of Ministers), academics and doctors. It would be a five-day (March 25 to 29, 2000) visit to hospitals, orphanages and old folks’ homes.

l learned a lot from seeing the injustice and cruelty inflicted upon innocent people in the name of greed. It made me proud that our prime minister felt it important to report to the cabinet the extent of the suffering of the Iraqis.

On a personal level, I saw how deftly Dr Siti Hasmah led our delegation. She was professional, kind and compassionate.

At a briefing before our departure, she suggested that we did not wear bright clothes or jewellery, “because we are visiting a country which has gone through war and devastation”.

On the day we flew, via Amman, a news flash on the foreign wires quoted the then American secretary of state Madeline Albright as saying Malaysian delegation’s visit to Iraq was irrelevant and an interference. We learned later that foreign visitors before us had only been missionaries and do-gooders. This was the first time the spouse of a state-leader had made a visit.

On arrival in Baghdad after a long drive from Amman, the full extent of the seriousness of the visit hit us. We were heavily escorted everywhere. First on the agenda was a visit to Deputy Prime Minister Tariq Aziz’s office. He wanted to express his gratitude personally to Dr Siti Hasmah for this visit. It was a short, emotional meeting at his office where he said over and over again, “Please thank my brother Mahathir.” I felt a surge of pride.

On the second day, we had a scare. We were congregating for the morning’s programme to an orphanage when an Iraqi soldier interrupted, said something to Dr Siti Hasmah and the next thing we knew she got up only to be whisked off in a flash. We were stunned, the Malaysian soldiers accompanying us were stunned and then everyone became worried. No one knew where she was taken and what would happen if she did not return?

After half a day at the orphanage, she appeared smiling. Back in the hotel, she told us of the cloak-and-dagger operation by the Iraqis to “kidnap” her for a while on the orders of the then Iraqi president Saddam Hussein. She met Saddam, who wanted to thank her personally too.

The following days were filled with heart-wrenching visits to hospitals and orphanages. Heart-wrenching because beds were overcrowded, children had to queue for their turns to get oxygen and most were suffering from leukemia resulting from depleted uranium. Other children including those in orphanages were malnourished and these problems affected their education and daily lives.

We did not come empty-handed. Dr Siti Hasmah packed tonnes of medicine (forbidden because of the sanctions) to be distributed to hospitals. The doctors were visibly overwhelmed that one of them told us many more children’s lives could be saved by the latest antibiotics that we brought.

An unforgettable visit was the Al-Amiriah Children’s shelter that left 400 children dead. The shelter was constructed in such a way that the door automatically shuts when there are chemicals in the air. It took two days before it opened and all that’s left were the children’s remains on the walls and ceiling of the shelter like hair and skin which were stuck. I never saw Dr Siti Hasmah cry so much.

I also saw how seriously Dr Siti Hasmah took this visit. We had a free day on the last day; our Iraqi host suggested taking us to Babylon to see the historic Hanging Garden. We were thrilled but not Dr Siti Hasmah , who reminded us we were there to work. After some persuasion by our kind host, she relented provided we there was a hospital near Babylon. There was, and so we made the trip, visited the hospital and distributed the medicines.

The Iraq visit and the subsequent attack by the United States-led coalition two years later affected us greatly. For Dr Siti Hasmah, she has made it her cause to speak out against the devastation of war. Congratulations. And when you hear from a 93-year-old doctor and activist, it’s means a lot more.

Thank you for the lessons. Happy birthday, Dr Siti Hasmah!