Lawyer has samurai sword thrown at him by motorcyclist

PETALING JAYA: A lawyer had a sword thrown at him by an unknown assailant at the Jalan Duta High Court parking area yesterday.

Corporate Lawyer Azlan Zainal Abidin told theSun that the incident happened around 8am at a car park designated for lawyers.

“I was taking some things from the trunk of my car when I heard a loud thud and immediately closed the trunk. I saw that there was a katana (samurai sword) stuck between the trunk and my rear windscreen.

“In that split second, I saw a man on a motorcycle inside the parking area and thought, the only plausible thing at the time ... that he may have intended to throw the sword at me.”

Azlan said he was not the only target as the perpetrator also attacked another lawyer who was walking towards the court complex.

“After I looked at him, eye to eye, he just rode away ... not even in the least attempting to speed off or run but casually made his way to the parking compound exit.”

It was just before exiting the car park that Azlan said the perpetrator kicked the unsuspecting lawyer and rode off.

“Luckily that didn’t cause any serious injury.”

Unusual as this may seem, Azlan thinks it a random attack. The other lawyer who got kicked and myself are not connected in anyway or in any particular case. It just so happened that today I was handling my litigation files.”

A police report has been lodged, and Sentul district police chief ACP S. Shanmugamoorthy Chinniah said investigations were ongoing under Section 506 of the Penal Code for criminal intimidation. 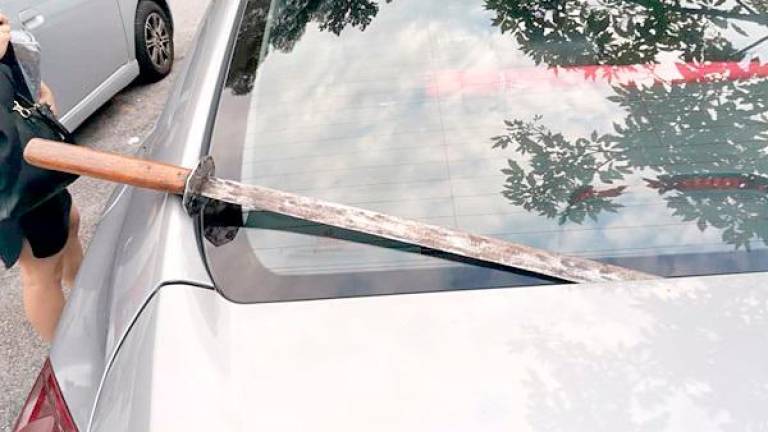 The Samurai sword that was flung at the lawyer’s car.

On Jan 22, a similar incident took place at the High Court in Klang where the husband of a woman who was being charged was assaulted at the parking area.

The woman’s lawyers, Preakas Sampunathan and Teeruvarasu K. Muthusamy, told theSun that the incident took place at 11am.

“The incident saw 47-year-old Gan Kian Teck bashed at the car park within the court vicinity, leaving him bloodied with injuries to his eyes and head.”

Gan’s wife was in the courtroom when he went to his car to collect some belongings.

Two men suddenly approached and attacked him with a helmet and also kicked him several times.

“He shouted for help before the assailants got away on a motorcycle,” Teeruvarasu said.

Police said several arrests have been made.