BANGKOK: An anti-government protest in Thailand drew at least 10,000 people on Sunday, police said, the largest political demonstration the kingdom has seen in years as a pro-democracy movement gathers steam.

Student-led groups have held near-daily protests across the country for the past month to denounce Premier Prayut Chan-O-Cha -- a former army chief who led a 2014 coup -- and his military-aligned administration.

By Sunday evening the protesters -- who are demanding major democratic reforms -- had taken over the busy intersection around Bangkok's Democracy Monument, which was built to mark the 1932 revolution that ended royal absolutism.

Police closed off surrounding main roads to stop incoming traffic, and an official at Bangkok's Metropolitan Police Bureau told AFP the crowd size had grown to 10,000 by 6 pm (1100 GMT).

"Down with the dictatorship," the students chanted, many holding signs critical of the administration. Others held pigeon-shaped cutouts representing peace.

The gathering at Democracy Monument is the largest the kingdom has seen since Prayut staged a putsch in 2014.

Tensions have risen over the last two weeks with authorities arresting three activists. They were released on bail after being charged with sedition and violating coronavirus rules.

They were told not to repeat the alleged offences, but one of them -- prominent student leader Parit Chiwarak -- arrived at the protest venue on Sunday flanked by cheering supporters. 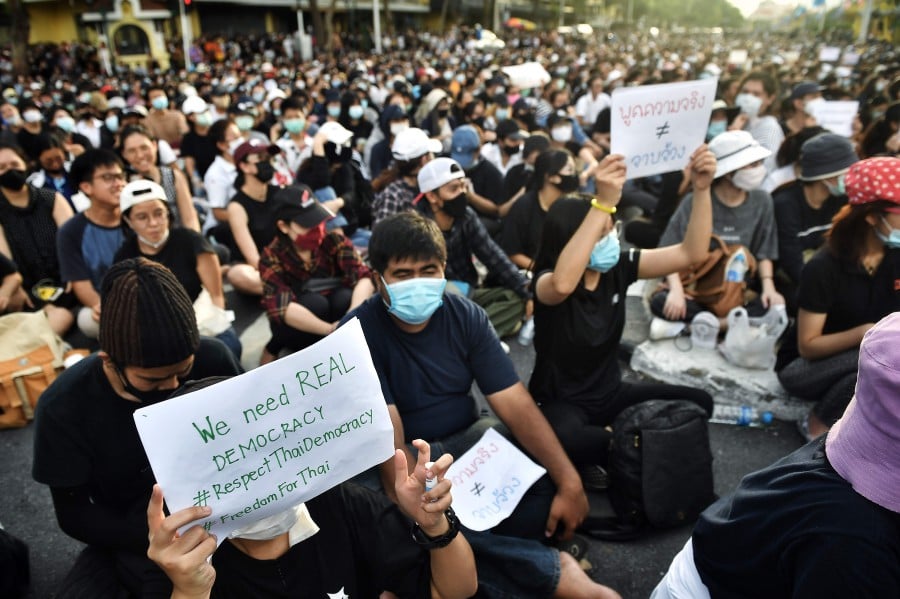 Partly inspired by the Hong Kong democracy movement, the

protesters claim to be leaderless and have relied mostly on social media campaigns to draw support across the country.

"Give a deadline to dictatorship" and "let it end at our generation" were the top Twitter hashtags in Thailand on Sunday.

The protesters are demanding an overhaul of the government and a rewriting of the 2017 military-scripted constitution, which they believe skewed last year's election in favour of Prayut's military-aligned party.

A rally last week by around 4,000 demonstrators also called for the abolition of a law protecting Thailand's unassailable monarchy, and for a frank discussion about its role in Thailand.

King Maha Vajiralongkorn sits at the apex of Thai power, flanked by the military and the country's billionaire business elite.

A draconian "112" law can see those convicted sentenced to up to 15 years in jail per charge.

During Sunday's demonstration, which drew a diverse crowd of all ages, many said they agreed with the student demands.

"We can't let the students walk on this difficult path alone," a 68-year-old woman told AFP, declining to provide her name.

But the increasingly bold pro-democracy movement also has its detractors.

Standing at one corner of the monument's intersection were dozens of royalist protesters carrying portraits of the king and queen.

He struck a more conciliatory tone in a televised speech later, appealing for unity and saying the "future belongs to the young".

Thailand has long seen a cycle of violent protests and coups, with the arch-royalist army staging more than a dozen putsches since 1932.

The growing discontent also comes as the kingdom goes through one of its worst economic periods since 1997 because of the coronavirus pandemic.

Millions have been left jobless, and the crisis has exposed the inequalities in the Thai economy, which is perceived to benefit the elite, pro-military establishment.