SUPERVILLAIN origin story Joker accumulated US$234m at the worldwide box office over the weekend ending Oct 6, per industry tracker ComScore, with China’s My People, My Country, The Captain, The Climbers, and Chinese-American co-production Abominable making up the rest of the globe’s top five.

Warner Bros’ Joker took a combined US$234m over its opening weekend, putting it at the top of the global box office over the same time period.

The R-rated film now holds the title for the US’s biggest October opening, after Spider-Man spin-off Venom made US$80m in 2018.

Though the US$93.5m opener nudged ahead of last month’s R-rated It: Chapter Two, September 2017’s Stephen King adaptation It retains the title of Fall’s biggest domestic opening weekend at $123m. 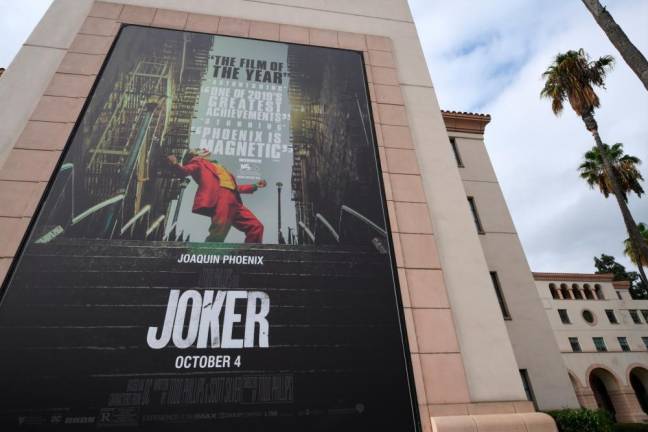 Chinese or joint-Chinese made films were responsible for the rest of the top five, despite a reduced number of territories debuting each movie.

Running to almost two hours, My People, My Country (US$100.6m) is a seven-part anthology film with an all-star cast, released on the occasion of the 70th anniversary of the People’s Republic of China.

Airplane accident drama The Captain, which is about a Chinese pilot’s successful landing of a damaged passenger plane, accumulated US$100.4m, making it the weekend’s third highest-grosser worldwide.

A US$36m take for US-Chinese animated adventure Abominable, which begins in Shanghai and ends on Chinese-Nepalese peak Mount Everest, was enough to place it fourth worldwide, with The Climbers (fifth place, US$30m) based on historical Chinese expeditions up the same Himalayan summit.

Can you catch Covid-19 from delivered packages?
02 Jun,2020
Farid Kamil gets another 13 months' jail
02 Jun,2020
Zuckerberg distances Facebook from Twitter in Trump fight
29 May,2020
Trump signs order targeting social media after tweets flagged
29 May,2020
Use MySejahtera app to find out Covid-19 cases within 1km radius
29 May,2020