PATNA: A girl in eastern India was allegedly gang-raped and shot dead, police said Tuesday, the latest in a string of sexual assaults that has triggered angry protests across the country.

Police suspect that the victim, whose age and identity was not known, was gang-raped, killed and her body burnt before being dumped in a deserted field in Buxar town in Bihar state.

“We received (her) burnt body on Tuesday, a day after she went missing from her house in Buxar town,“ a police official told AFP.

The officer said they were still awaiting a medical report.

The incident comes on the heels of the brutal gang-rape and murder of a 27-year-old veterinary doctor in southern Hyderabad city last week.

A gang of four men deflated a tyre on her scooter and lured her to a truck yard with the promise of fixing it. Police say that the men then raped and murdered her before setting the body on fire under an isolated bridge.

The horrific crime has triggered protests across India, with demonstrators urging authorities to ensure rape cases are tried quickly and those convicted punished without delay.

On Tuesday, hundreds of protesters gathered in the heart of capital New Delhi demanding speedier punishments for rapists.

Cases in India often languish for years under the country’s labyrinthine judicial system despite recent efforts to set up fast-track courts.

Some of the protesters Tuesday called for violent and instant reprisals. 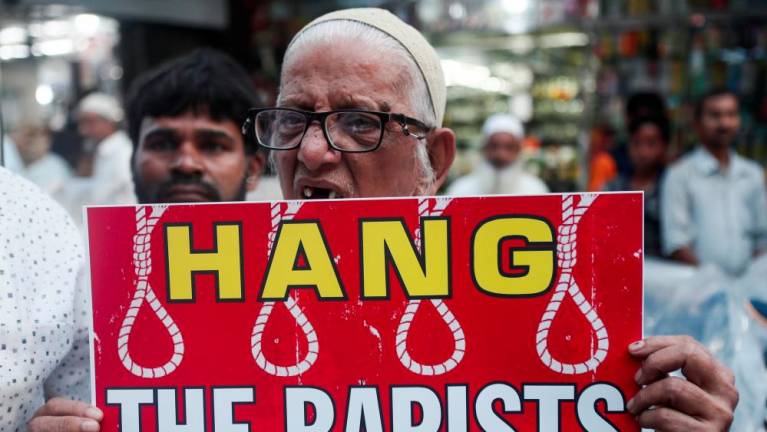 A man holds a placard and shouts slogans during a protest against the alleged rape and murder of a 27-year-old woman on the outskirts of Hyderabad, in Mumbai, India, Dec 3, 2019. — Reuters

“If women chop off the heads of a few of these rapists, then automatically we’ll see the society change for the better,“ said protester Kanchan Giri who was carrying a sword.

“I think women should take a sword when they step out of their houses so that if they encounter a rapist they should behead him.”

Swati Maliwal, head of the Delhi Women’s Commission, announced she was going on hunger strike to demand a law stipulating that those who rape minors are hanged within six months of conviction.

“I am demanding strict and swift punishment,“ she said, sat with the protesters.

Sexual violence against women was thrown under the spotlight after the fatal gang-rape of a physiotherapy student on a New Delhi bus in 2012.

Massive blast shook Lebanon’s capital Beirut
05 Aug,2020
Trump gives TikTok 6 weeks to sell itself to US company
04 Aug,2020
Microsoft confirms it is in talks to buy TikTok after CEO talks to Trump
03 Aug,2020
Grounded by pandemic: Singapore on list of 10 airports with the most parked jets
03 Aug,2020
'Red Bull heir was driving under influence of drugs'
30 Jul,2020