SYDNEY: Bushfires flared in southern Australia on Thursday as a heatwave expected to bring renewed misery set in, and officials warned some areas are “just at the beginning” of the devastating crisis.

Soldiers went door-to-door advising residents to leave the South Australian town of Parndana on Kangaroo Island after a large blaze bore down on the area, with temperatures there soaring to 38°C.

In neighbouring Victoria state, officials extended a “state of disaster” declaration for a further 48 hours ahead of scorching temperatures that were due to set in Friday, further stroking massive fires.

“It’s a very dangerous and dynamic situation that will confront us over the next 12, 24 and 36 hours,“ Victoria Emergency Management commissioner Andrew Crisp said.

The catastrophic bushfires have killed at least 26 people, destroyed more than 2,000 homes and scorched some eight million hectares — an area the size of the island of Ireland.

Scientists say the drought-fuelled blazes are being worsened by climate change, which is increasing the length and intensity of Australia’s fire season.

Victoria Premier Daniel Andrews warned residents to brace for further devastation in what has already been a months-long crisis.

“We’re just at the beginning of what will be a really, really challenging summer,“ he said. 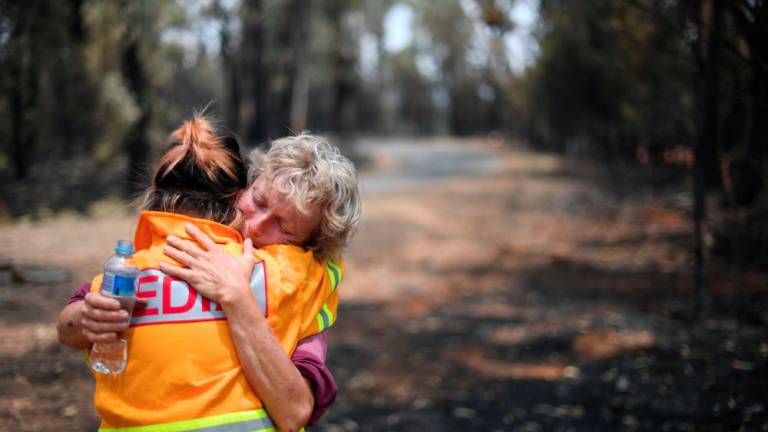 This photo taken on Jan 8, shows 64-year-old orchardist Stephenie Bailey (R) reacting as she describes the impact bushfires have had on her farm in Batlow, in Australia's New South Wales state. — AFP

Despite cooler weather and rainfall providing some relief in some bushfire-affected areas this week, almost 150 fires were still burning in the worst-hit New South Wales (NSW) and Victoria, the vast continent’s most populated regions.

Vast tracts of the states are facing “severe” fire danger Friday, with some areas in Victoria expected to experience “extreme” conditions.

“These fires are absolutely still moving, still growing in our landscape and they pose significant risk to communities.”

However in some burnt-out areas people have turned to the painful task of rebuilding their homes and lives, with the process expected to take years.

“We are always standing shoulder-to-shoulder with those who have been impacted by the devastating fires, this catastrophe which has come to New South Wales and we are stepping up to make sure we provide that support,“ NSW Premier Gladys Berejiklian said.

The bushfire toll has not been limited to human losses — the blazes have also wreaked wide-ranging environmental damage.

University of Sydney scientists estimate one billion animals have been killed in the fires. The figure includes mammals, birds and reptiles, but not frogs, insects or invertebrates.

The smoke has also travelled more than 12,000km to Brazil and Argentina, according to weather authorities there.

Australia experienced its driest and hottest year on record in 2019, with its highest average maximum temperature of 41.9°C recorded in mid-December. — AFP