Amazon wildfires: 'Lungs of the earth are in flames'

RIO DE JANEIRO: As dozens of fires scorched large swaths of the Amazon, the Brazilian government Thursday struggled to contain growing global outrage over its environmental policies, which have paved the way for runaway deforestation of the world’s largest rainforest.

The fires, many intentionally set, are spreading as Germany and Norway appear to be on the brink of shutting down a US$1.2 billion (RM5 billion) conservation initiative for the Amazon.

Concern over the environmental policies of President Jair Bolsonaro, which have prioritised the interests of industries that want greater access to protected lands, has also put in jeopardy a trade agreement the European Union and a handful of South American nations struck in June, following decades of negotiations.

“The ongoing forest fires in Brazil are deeply worrying,” the European Commission said in a statement Thursday. “Forests are our lungs and life support systems.”

Photos of the fires have been shared by NASA, politicians and celebrities this week, setting off a call on social media to #PrayForAmazon.

Actor Leonardo DiCaprio called on his nearly 34 million Instagram followers to become more environmentally conscious in a post warning that “the lungs of the Earth are in flames.” 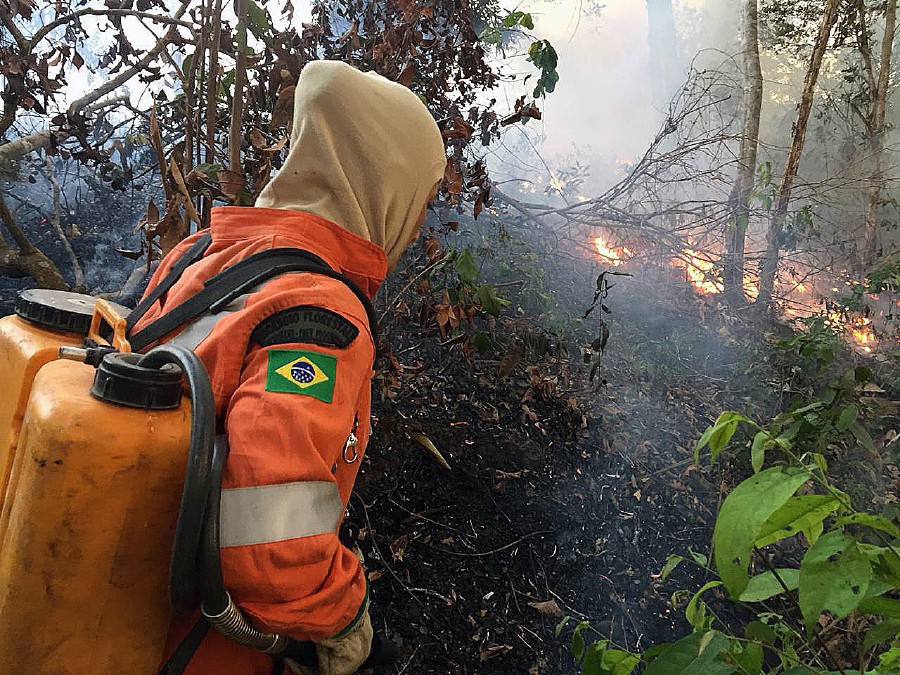 A handout picture provided by Porto Velho's Firefighters shows a fire at the Brazilian Amazonia, in Porto Velho, capital of Rondonia, Brazil, 18 August 2019 (issued 22 August 2019). The Brazilian region of the Amazonia has registered over half of the 71,497 fires detected this year between January and August, an 83 percent increase over the the same period last year according to Brazil's National Institute for Space Research (INPE). (EPA/Porto Velho Firefighters)

The Bolsonaro administration has reacted with indignation to the outrage, claiming without presenting any evidence that non-governmental organisations could have started the fires to undermine the far-right president.

In the northern state of Rondônia, which has been among the most affected by the fires, indigenous leaders described watching wild animals dashing out of areas of the forest as the flames approached.

“We saw wild pigs, tapirs, armadillos, anteaters, snakes in larger numbers than we are used to,” said Adriano Karipuna, a leader in the Karipuna indigenous community, whose territory has been affected by fires. “We saw the forest covered in smoke, and the sky darkened. Our eyes became red due to the smoke.”

Karipuna said loggers are striding into protected areas, emboldened by Bolsonaro’s views that the legal protections granted to indigenous lands are an unreasonable impediment to profiting from the Amazon’s resources.

“He empowered them, he told them to invade,” Karipuna said in a phone interview.

“There’s a reason why Brazil has the best environmental credentials and the best preserved forests in the word: We know how to protect and take care of what is ours,” Filipe Martins, a foreign policy adviser to Bolsonaro wrote in a series of messages on Twitter. “If you are wondering who is going to save the Amazon, here’s a very straightforward answer for you: It’s not the empty, hysterical and misleading rhetoric of the mainstream media, transnational bureaucrats and NGOs.” Forest fires are common in Brazil during this time of the year, which tends to be cooler and drier. But the number now raging in the Amazon is unusually high.

Data released by Brazil’s National Institute for Space Research shows that from January to July, fires had consumed 4.6 million acres of the Brazilian Amazon, a 62 per cent increase compared to last year.

Joênia Wapichana, a federal lawmaker from the northern state of Roraima, was among a group of members of Congress who called Thursday for the impeachment of Bolsonaro’s environment minister, Ricardo Salles.

“The government has a duty to come up with an emergency plan for the Amazon,” said Wapichana, the first indigenous woman elected to Congress. “There is no response from the government. The government is acting in a defensive and desperate manner.”

In recent months, as the Bolsonaro administration has questioned the usefulness of the Amazon Fund bankrolled by German and Norwegian taxpayers, leaders in those countries have come to consider abandoning it.

The fund was started in 2008, when Brazil was making strides in curbing deforestation through an ambitious set of policies that included aggressive law enforcement and conservation efforts.

“The policies of the Brazilian government on the Amazon region call into question whether they are still pursuing the goal of consistently reducing deforestation rates,” Germany’s Foreign Ministry said in a statement this month. “We need certainty on that account before we can continue project cooperation.”

The trade deal between the European Union and Brazil, Argentina, Paraguay and Uruguay still needs to be ratified by the European Parliament, and it is meeting resistance from environmental activists who are pressing lawmakers on the issue.

President Emmanuel Macron of France posted a tweet Thursday calling the fires “an international crisis” and called for the “emergency” to be discussed at this weekend’s Group of 7 summit he is hosting.

Brazil’s shifting reputation on the environment has made its diplomatic missions abroad targets of protests by militant conservation groups. 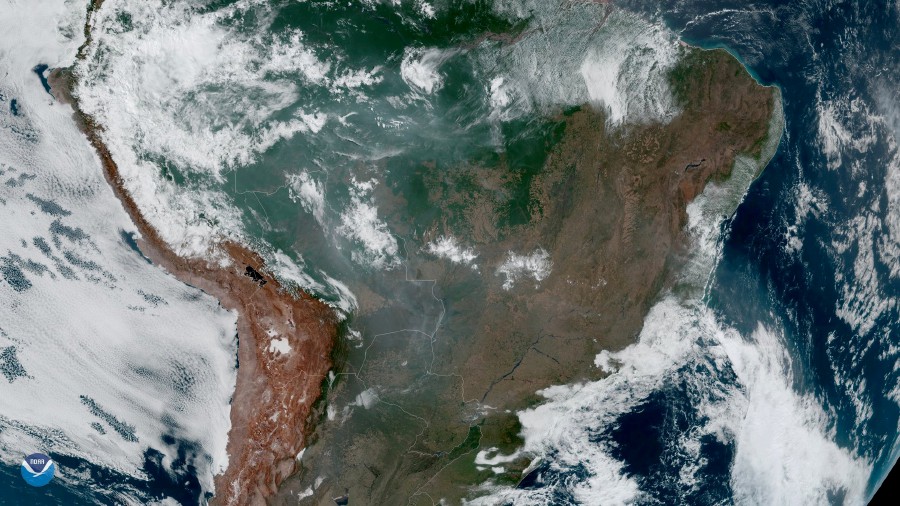 Fires, burning in the Amazon Rainforest, are pictured from space, captured by the geostationary weather satellite GOES-16 on August 21, 2019 in this handout image obtained from social media. (NASA/NOAA/Handout via REUTERS)
Last week the police in London arrested six activists from the Extinction Rebellion group who glued themselves to the windows of the Brazilian Embassy.

“We need to do what we can to protect what Bolsonaro’s government is trying to destroy,” Lazer Sorrë, 18, a high school student who took part in the protest in London, said in a statement the group released. – New York Times